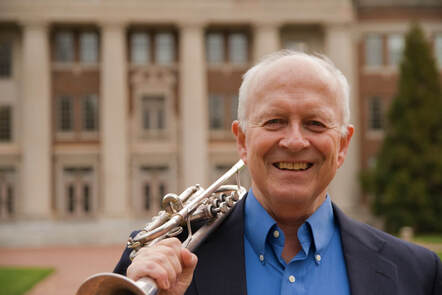 Bill  Lawing enjoys a distinguished career as a solo, chamber and symphonic musician. A lifelong classical symphonic musician, he currently performs with the Western Piedmont Symphony, and after several years as an extra musician, is excited to become a standing member of the North Carolina Brass Band. Concerto and solo performances have included concerts with the Charlotte Symphony and Charlotte Pops, the Chamber Orchestra of Macau, the Western Piedmont Symphony, the Lee County Orchestra, and the Davidson College Symphony Orchestra. He is a founding member of Carolina Brass, a quintet largely from the Charlotte Symphony that has performed together for nearly 40 years. With pianist Cynthia Lawing, he gives annual international performance tours. Recent performances have included concerts in Switzerland, Italy, Greece, Austria, Germany, the Netherlands, Belgium, China, Taiwan, and Hong Kong. Over his career, he has had the privilege to perform under the batons of Loren Maazel, Zubin Mehta, Aaron Copland; perform symphonic concerts with Ella Fitzgerald, Benny Goodman, Sarah Vaughan, Bernadette Peters, Johnny Mathis, Aretha Franklin, Bela Fleck, and the Kruger Brothers.

A music professor at Davidson College in North Carolina, he is the inaugural holder of the J. Estes Millner Endowed Chair in Music at Davidson.  He has received three of Davidson’s teaching awards. He directs the jazz ensemble and oversees the Davidson’s jazz program. His annual guest artist concerts have recently included Chick Corea and Pat Metheny. His current classes focus around different distinctly American musical genres, and also include a class in music production. As a part of his Appalachian Music class, he produces a concert series of Traditional Appalachian music.

Outside of music, he spends much of his free time mentoring high school refugees in Charlotte, guiding them through the college application and enrollment process. He has recently volunteered to become a Guardian ad Litem advocate for abused and neglected children in the court system