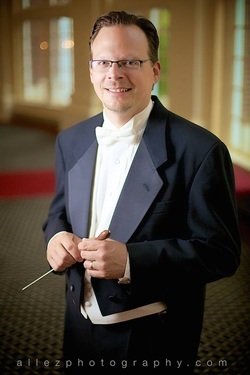 Brian has held the position of Assistant Conductor of the River City Brass Band, where he played euphonium full time for six years.  Brian has been featured with the RCBB on several performances, both as a euphoniumist and conductor.  In addition to his duties with the RCBB, Brian played euphonium and trombone for several years with the River Bottom Quartet, a diverse low brass chamber group composed of River City Brass Band members.  Other chamber ensemble activity includes playing euphonium in Tubas In The Sun, a quartet of tuba and euphonium talent in central North Carolina.  Brian has previously served on the faculties of UNC-Greensboro, Slippery Rock University, the University of Texas at Arlington and Texas Woman’s University.  He also served as the Euphonium Teaching Fellow at the University of North Texas, where he completed a DMA in Euphonium Performance.

Brian has been active promoting and commissioning new music for the euphonium, including several pieces for euphonium and percussion on his album, "Praxis".  Other commissions include the 2010 composition for euphonium and wind ensemble, “Cri de Coeur”, by renowned American composer Libby Larsen.

In addition to “Praxis”, Brian can also be heard on numerous other recordings, including his previously released solo album, “Genesis”, and on the River Bottom Quartet’s album, “In Too Deep”, both of which received glowing reviews.

Brian resides in High Point, NC with his wife, Audrey, and two children, Clara and Henry.