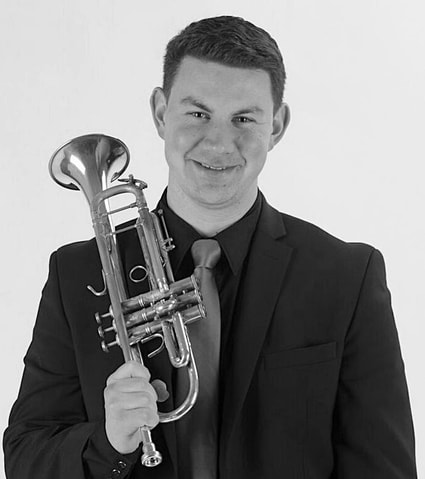 Vincent Bach trumpet artist Garrett Klein has been a member of the North Carolina Brass Band solo cornet section ever since moving to Greensboro, NC in 2019. Garrett serves as Assistant Professor of Trumpet at the University of North Carolina Greensboro where he is the head of the large and vibrant UNCG Trumpet Studio. In addition to his teaching position at UNCG, Garrett is a member of the internationally acclaimed Dallas Brass.

Outside of teaching and touring with Dallas Brass, Garrett stays active as an orchestral player, soloist, and clinician. He has performed as a guest musician with orchestras around the world, including the Singapore Symphony Orchestra, Malaysian Philharmonic Orchestra, The Phoenix Symphony, Tucson Symphony Orchestra, and the Charlotte Symphony. As a soloist, Garrett demonstrates his passion for sharing exceptional new music for the trumpet by giving recitals which feature new or lesser-known compositions. He has also received multiple invitations to perform new works for trumpet at the International Trumpet Guild Conference.

Garrett’s graduate studies took place at Arizona State University, earning the Doctor of Musical Arts and Master of Music degrees, along with a Certificate in Music Theory Pedagogy. Prior to studying at ASU, he attended the prestigious Yong Siew Toh Conservatory of Music studying trumpet and conducting. His Bachelor of Music degree came from St. Olaf College in Minnesota. Garrett’s primary teachers have been Steven Hagen, Martin Hodel, and David Hickman. Garrett and his wife, Mara, enjoy traveling the world, spending time in the mountains, and playing with their dog, Scout.

Garrett is an artist/clinician for the Conn-Selmer Company and has proudly performed on Bach Stradivarius instruments throughout his career.