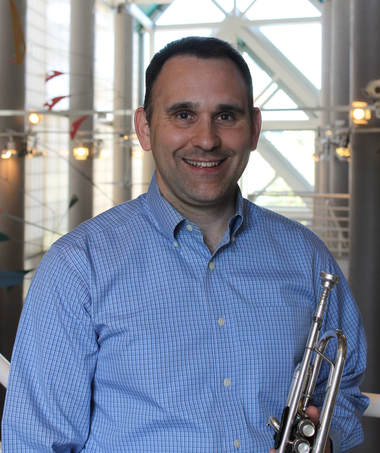 Robert also performed as co-principal and principle cornet/trumpet with the Air Force Concert Band and Symphony Orchestra for over fifteen years. He had opportunities to perform all across the country inspiring the American public to a heightened sense of patriotism and service as well as on over fifty recordings and with many renowned artists, including Jon Faddis, Doc Severinsen, Allen Vizzutti, Jose Feliciano, Kool & The Gang, Lone Star, Keiko Matsui, Glen Campbell, Wynonna Judd, Tony Bennett, and Peter Erskine.

Before closing out his Air Force career, having been promoted to Chief Master Sergeant, the highest enlisted grade, he spent over 4 years leading the Air Force Ceremonial Brass in more than 1,100 engagements a year performing for the world's highest officials.

Highlights of his Air Force career include over thirty national tours, performing for four US Presidents, six inaugurations, two Macy’s Fireworks Spectacular events, the Macy's Thanksgiving Day Parade, the dedications of the Air Force and Pentagon Memorials as well as the state funeral for former President Gerald Ford and several NBC Today Show appearances in New York City. While in the Air Force he went on to earn his Master’s Degree in Trumpet Performance from The Catholic University of America in Washington D.C..

In addition, Robert has over twenty years teaching experience and has been a guest clinician around the country where he presented master classes to students of all ages, enhancing musicianship and piquing interest in musical careers. His primary teachers have included Dr. Richard Burkart, Michael Sachs, Langston Fitzgerald, Chris Gekker and David Fedderly. Robert is also a member of The International Trumpet Guild and has performed with the Charleston Symphony Orchestra, the Arlington Philharmonic, the Goucher Chamber Orchestra and since moving to NC in 2018, the North Carolina Brass Band.  ​Robert is currently the Band Director at Woodlawn Middle School in Mebane, NC.