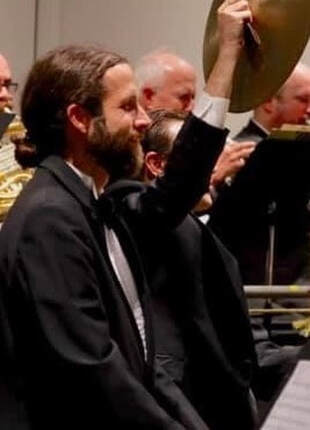 Shawn M Roberts is an active and eclectic performer, serving as Principal Percussionist with the American Prize winning Western Piedmont Symphony, providing accompaniment for the Appalachian State Dance Department, and percussionist with the North Carolina Brass Band and da Capo Brass. Notable performances include the Millennium Stage at the Kennedy Center in Washington, D.C., the Lotus Blossom World Music and Arts Festival in Bloomington, Indiana, and Director of the West Virginia University Steel Band during the induction of Ellie Mannette into the Percussive Arts Hall of Fame. Dr. Roberts founded World Wide Productions in 2005, overseeing various musical and artistic endeavors, including Eya! Afrolachian Drum and Dance Troupe performing and teaching traditional music and dance from a variety of countries across the African continent, the Caribbean and Middle-East. Dr. Roberts has been an adjunct instructor in the Hayes School of Music since 2005, currently serving as a lecturer in the General Humanities/Education area.

In addition to performance, Dr. Roberts is passionate about community programs. He conducts numerous workshops in schools both public and private, has served as a scholar and coordinator for Mapping the Beat, a program under the aegis of Arts Bridge America and funded by National Geographic, partnered with the Western Youth Network in creating music programs for underprivileged youth, and an instructor for the Duke University Talent Identification Program (TIP) serving academically gifted children across North Carolina.